Dedicated in 1959, this sanctuary is the third sanctuary of the First Evangelical Lutheran Church parish. It replaces the “old” church which was built in 1868 and renovated in 1915. Work began on the present sanctuary in 1957; the laying of the Name-Stone was in 1958; it was dedicated on February 1, 1959.

One enters the sanctuary through the large portals of stone and enters the narthex. One can see the large memorial window from the old church building showing the appearance of our Lord to the women at Easter.

The three most predominant symbols in a liturgical church are

Each conveys a message of how God comes to us: through Word and Sacraments

The altar is one of the most ancient symbols of Christ. Its position in the sanctuary conveys the importance of the centrality of the Eucharist in the Church. The carving on the front of the altar of the pelican is symbolic of Christ, who gave his own blood for our salvation. (According to tradition, the pelican will, in times of famine, pluck her breast until blood flows forth, with which she will sustain her offspring.) The other carvings around the altar of grapes and leaves is symbolic of the Eucharist. The reredos behind the altar provides a noble place for the candles and the altar cross, as well as for altar flowers. At its construction, the altar was attached to the reredos, but the wave of liturgical reform which swept across the Church universal following the Second Vatican Council was felt even here and the altar was pulled out from the wall so that the congregation would be able to participate more fully in the mystery of the Eucharistic celebration. 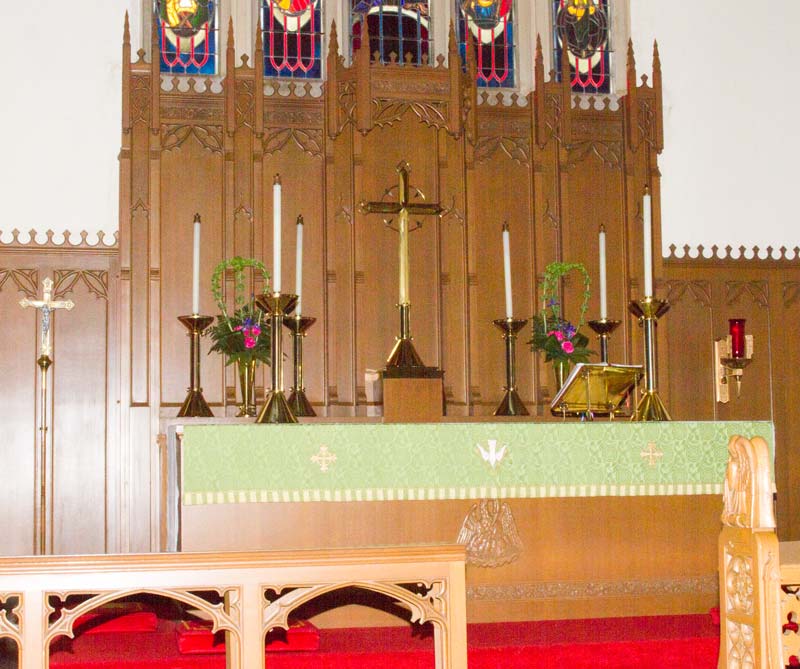 The pulpit occupies a very important place in the Lutheran tradition, for Christ comes to us not only in the Sacraments, but in the Word proclaimed.

The pulpit has a central carving on the front panel of the Agnus Dei (Lamb of God), the traditional symbol of the Person and work of Christ, who was our Passover Lamb and sacrificed himself for the remission of our sins. 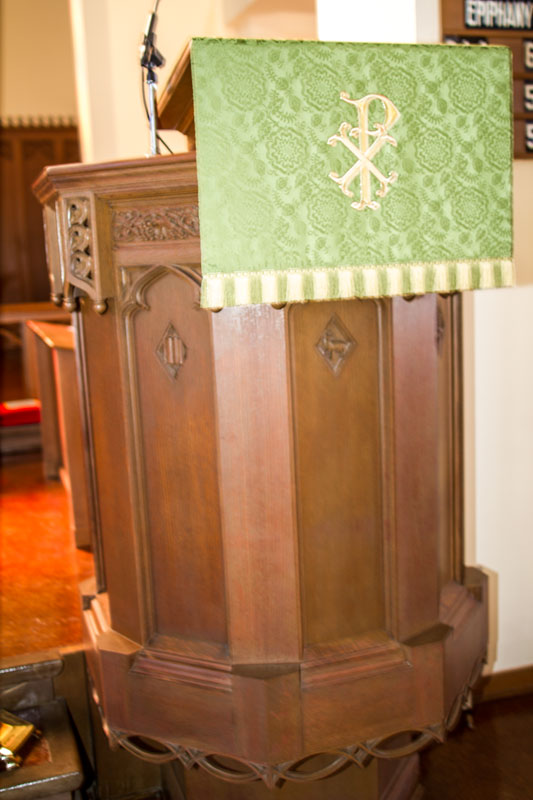 The Word is also proclaimed from the lectern (to the right of the altar). The first of the two lessons from Scripture in the Lutheran liturgy are read from the lectern. The central carving on the lectern is of a fish – not because of the marine setting of our parish, but because the fish was one of the first cryptograms (secret symbols) of Christianity during the persecutions of the early Church. The Greek word for fish is IXOYE (pronounced Icthus). The letters of the word were made into a cryptogram by the early Christians meaning “Jesus Christ the Son of God, the Savior.” 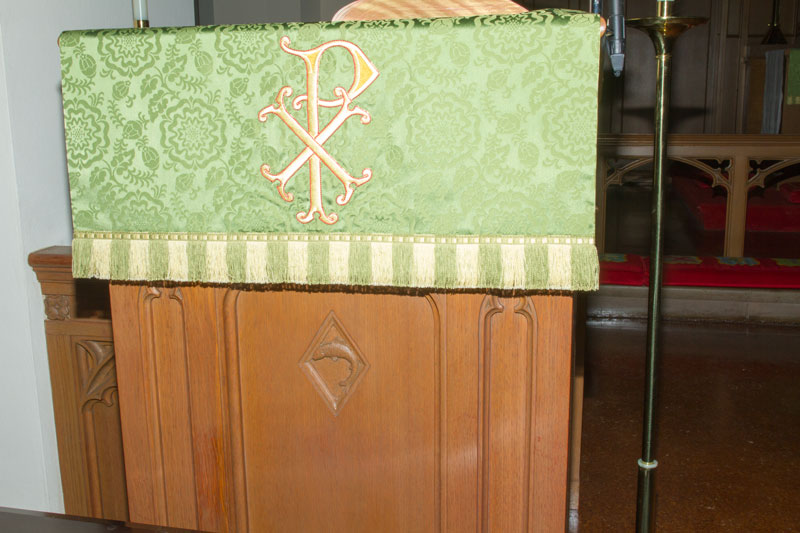 The Baptismal font is the other primary symbol in a liturgical church.  Baptism is central for Lutherans because it is in the waters of Baptism that we are re-born as children of God and inheritors of eternal life. In Baptism, one dies to sin and death and rises again to new life in Christ. The reformer Martin Luther says that we are to “Remember our Baptism” and always remember that we have been washed clean in the baptismal waters and that God has justified us, that is, put us in understanding of God’s justifying the sinner, unconditionally, that is at the heart of Lutheran understanding of Christianity. 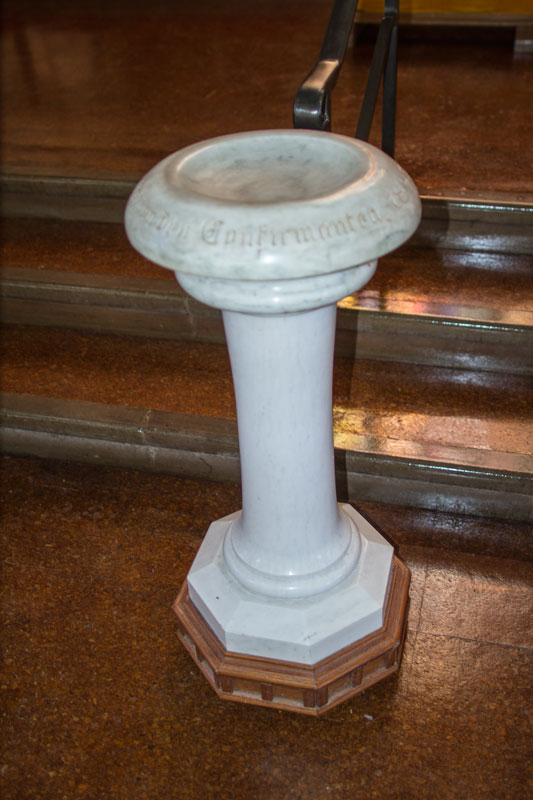 The Chapel area originally functioned as a choir area until the completion of the choir loft. It is now used for small gatherings, such as midday Lenten services, small weddings, and mid-week Communion celebrations. The altar and reredos in the chapel are those from the “old” church, and serve as a reminder of that continuity we have with the countless number of saints who have worshiped and communed there.

The Chancel window rises in majesty twenty feet above the reredos. It pictures Christ, the King of Glory, worshiped by the “saints, apostles, martyrs” who are portrayed by a set of figures in each lancet.

The small medallions in the lower part of the window borrow their theme from the Great Litany, an ancient responsive prayer of the Church.

They call to mind the means by which Christ accomplished his ministry and our salvation. 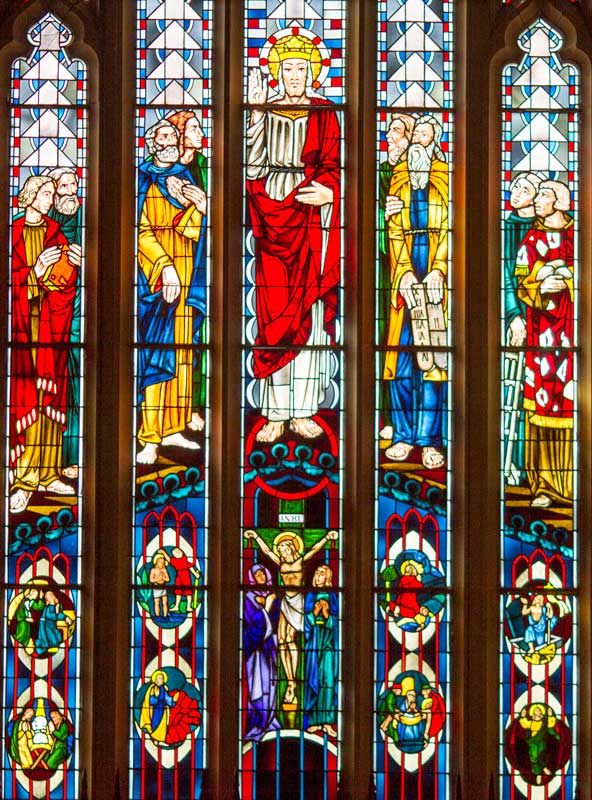 Above this magnificent window, you see the Quatrefoil in the top of the window brings to mind our Triune God: Father, Son, and Holy Spirit, each portrayed by an appropriate symbol.

Looking back to the balcony, the Rose window glows warmly in the east wall of the sanctuary above the pipes of the Freiburger Organ, which was dedicated on May 13, 1973.

It portrays Christ, the Head of the Church, surrounded by symbols indicating the primary tasks of the Church: the preaching of the Word and the administration of the Sacraments.

The remaining symbols indicate the corporal works of mercy as found in St. Matthew’s Gospel, Chapter 25. 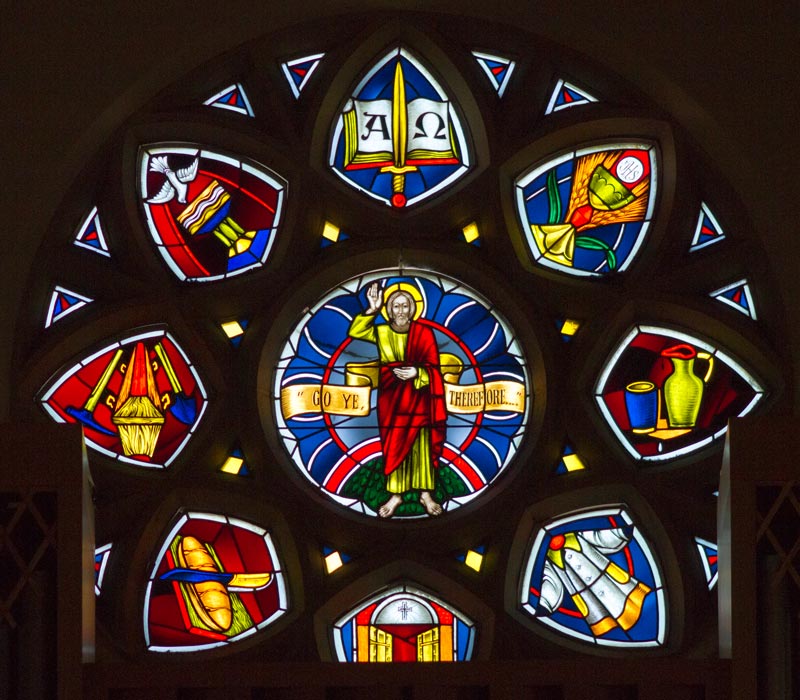 The Chapel chancel windows consist of three small medallion windows which indicate the three chief uses of the chapel: 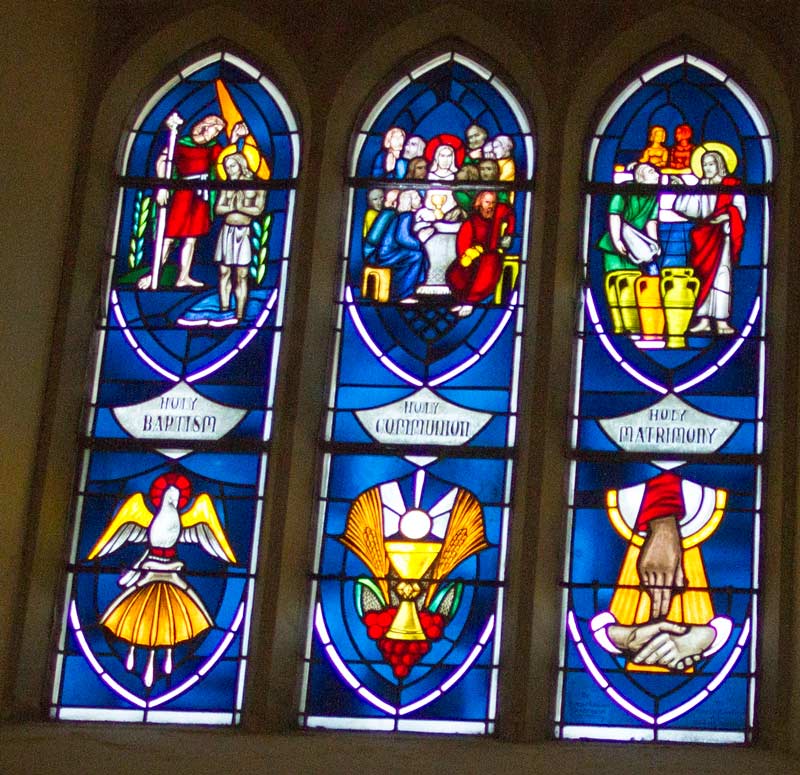 Here is a photo of the balcony of our church. 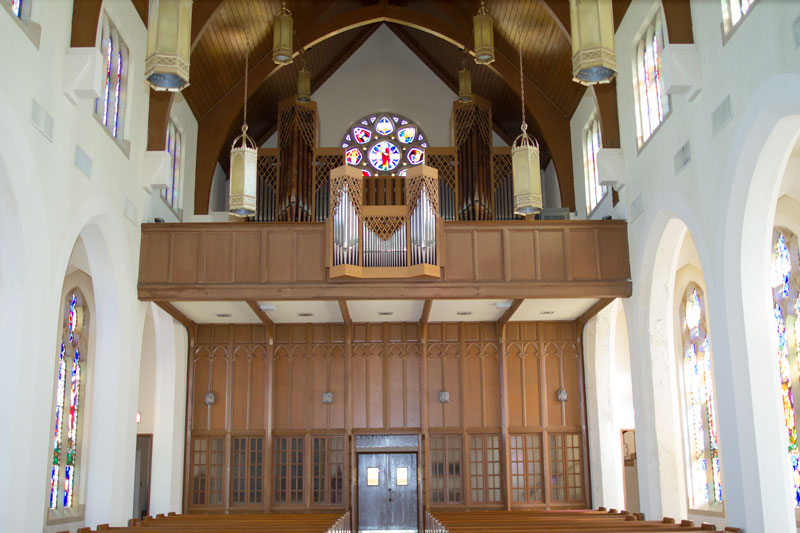 Height of Walls from Floor: 32 feet

Please view a tour of our Stained Glass Windows in our beautiful church. Each window has symbols and figures to teach and remind of us of God’s salvation that is freely given to all believers in the Lord Jesus Christ.

About Our Original Church 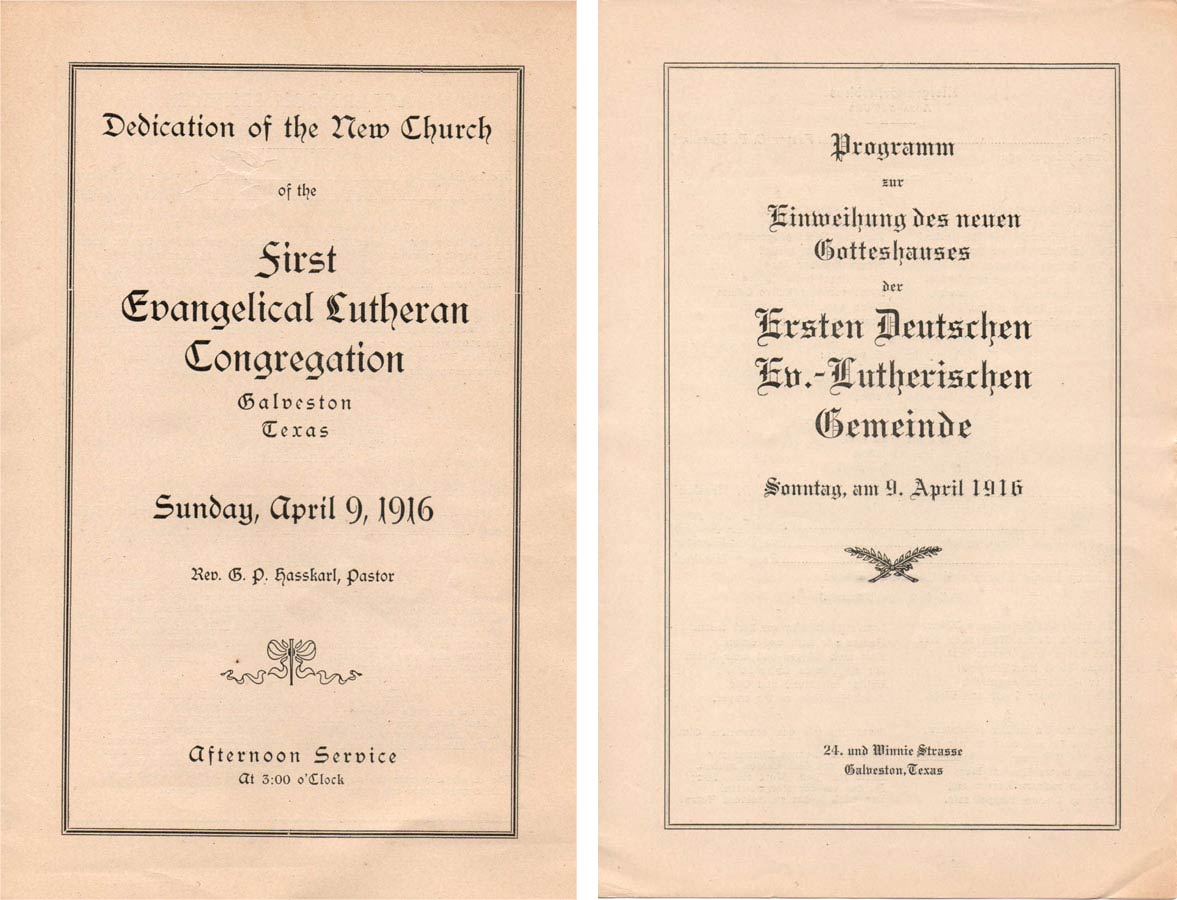 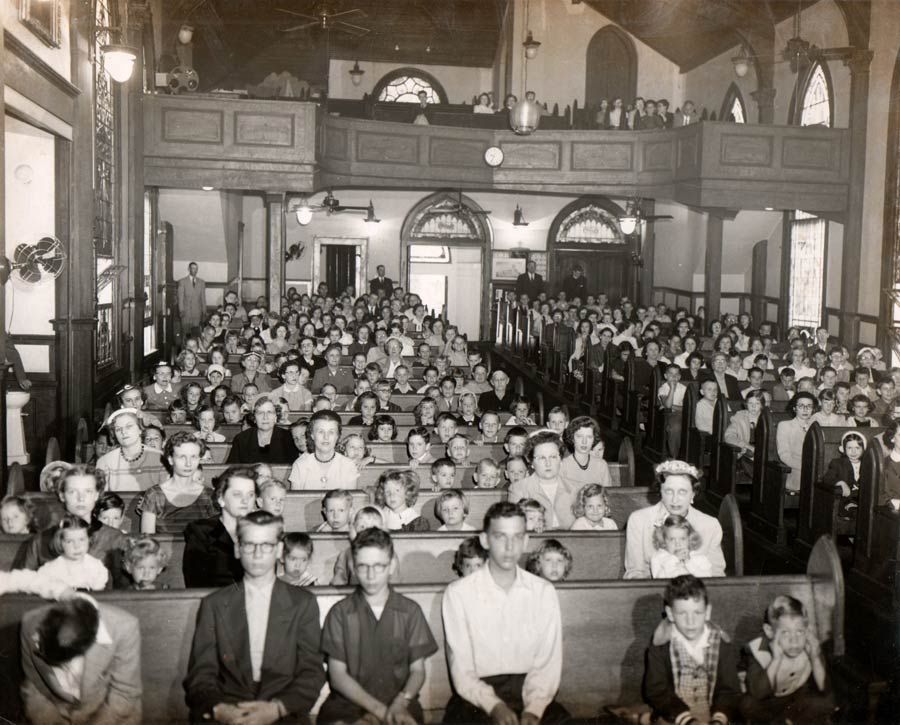 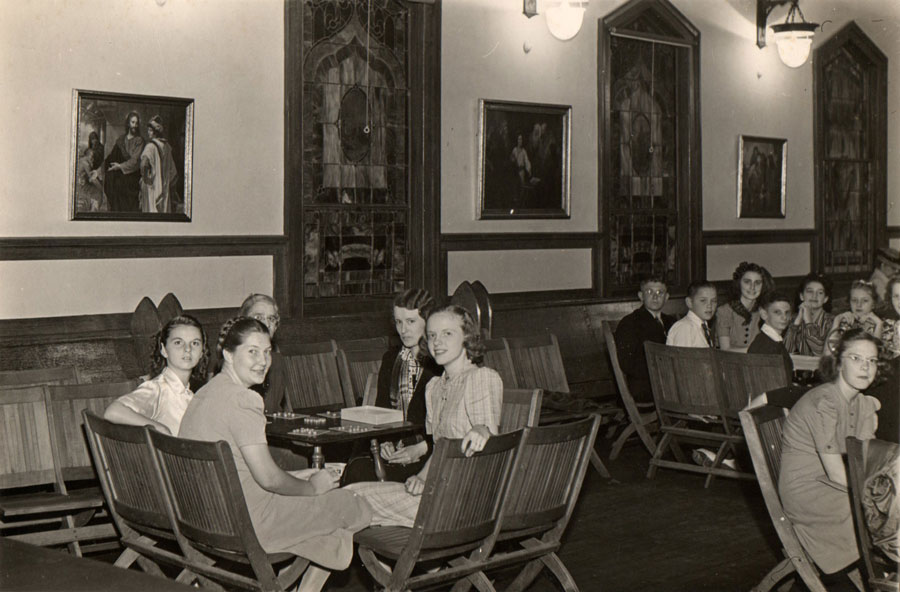 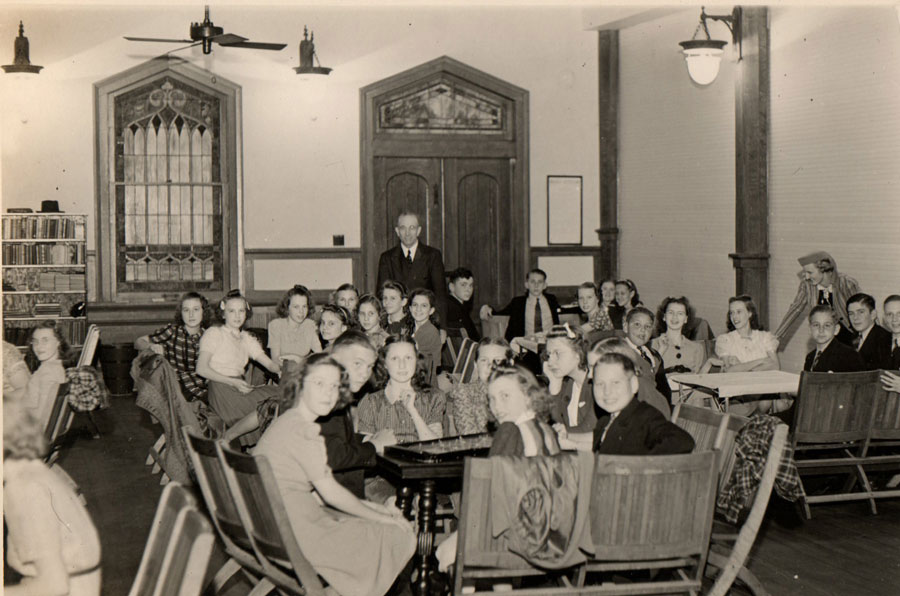 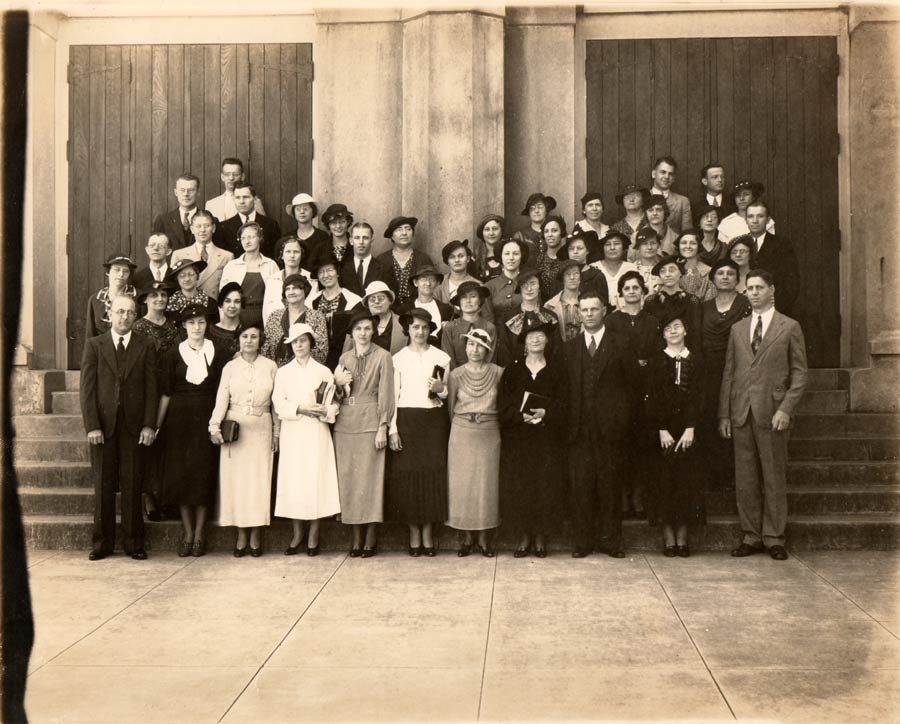 Long recognized as a “center of culture” in Galveston, the Lyceum Hall sits on the church grounds and is adjacent to the present sanctuary – separated only by a beautifully-landscaped wrought iron-gated courtyard. The cornerstone of the Lyceum is still visible today and reads: “Knowledge is Power” which reminds us of the great scriptural truth “And the truth shall make you free.” 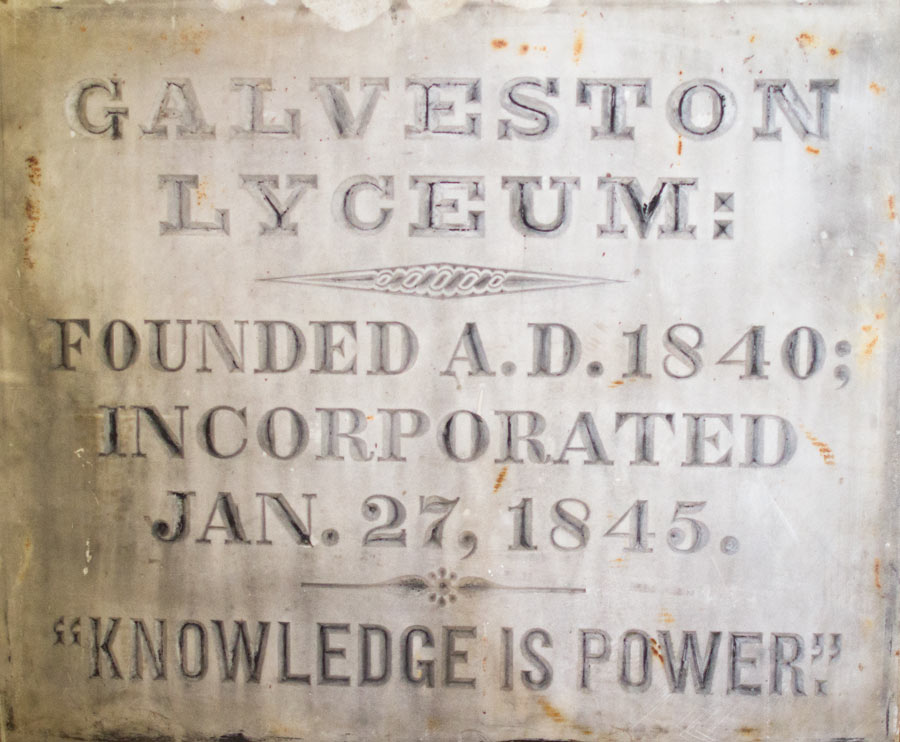 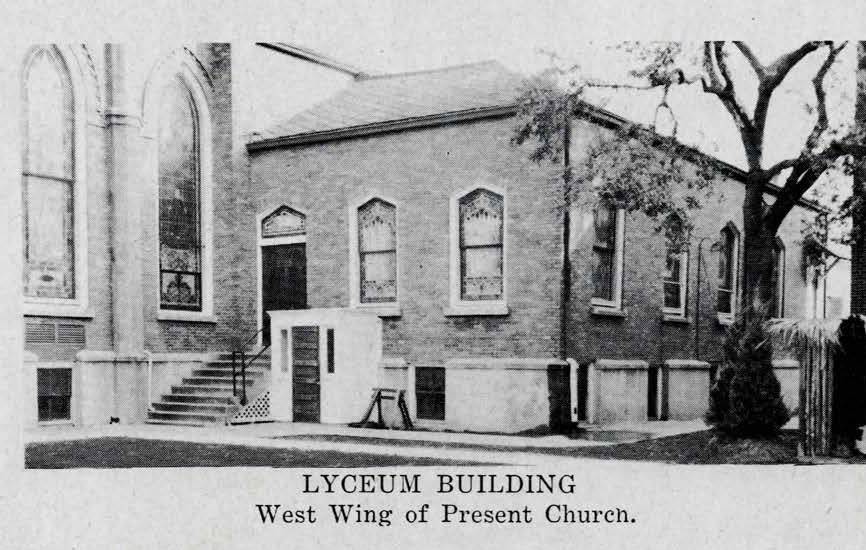